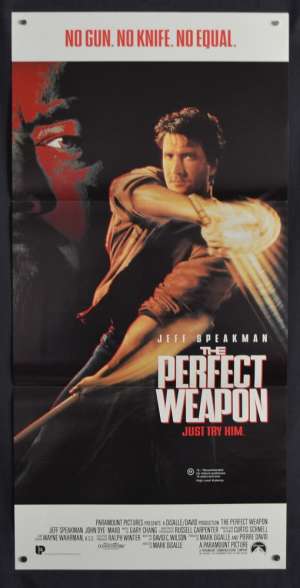 Daybill Poster.The Perfect Weapon is a 1991 action-martial arts film starring acting newcomer Jeff Speakman. Set in Los Angeles, the film relates the story of a young man, Jeff, who is trained in the martial art of Kenpō, and his fight against the Korean Mafia families. Speakman was a student of and was advised closely by Ed Parker in the making of this film.The film's taglines included "No gun. No knife. No equal." and "Just try him." and is the only well-known Hollywood depiction of Kenpo techniques on-screen.The hit 1990s song The Power by rap group Snap! is featured extensively in the movie's soundtrack.