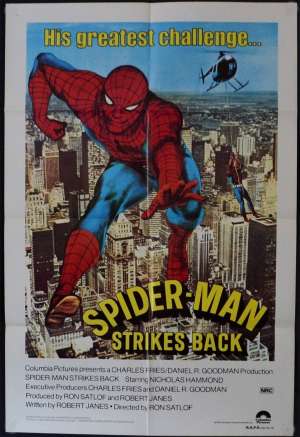 Australian One Sheet Poster in rare excellent condition.Spider-Man Strikes Back is a 1978 American live-action made-for-television superhero film that had a theatrical release abroad, a composite of the two-parter episode "Deadly Dust" of the contemporary television show The Amazing Spider-Man, released on 8 May 1978. It was directed by Ron Satlof, written by Robert Janes and stars Australian actor Nicholas Hammond as the titular character, Robert Alda, Robert F. Simon, Joanna Cameron, and Michael Pataki. The film was preceded by Spider-Man (1977) and followed by Spider-Man: The Dragon's Challenge.