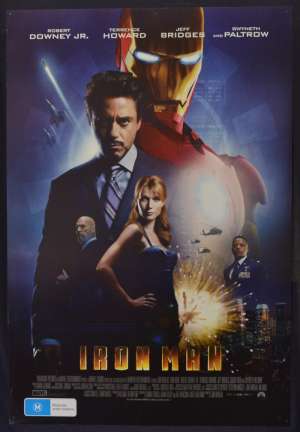 One Sheet Poster.Ironman is a 2008 American superhero film based on the Marvel Comics character of the same name, produced by Marvel Studios and distributed by Paramount Pictures. The film was directed by Jon Favreau, with a screenplay by the writing teams of Mark Fergus and Hawk Ostby and Art Marcum and Matt Holloway. It stars Robert Downey Jr. as Tony Stark / Iron Man, alongside Terrence Howard, Jeff Bridges, Shaun Toub, and Gwyneth Paltrow. In Iron Man, Tony Stark, an industrialist and master engineer, builds a powered exoskeleton after a life-threatening incident and becomes the technologically advanced superhero Iron Man. During filming, the actors were free to create their own dialogue because pre-production was focused on the story and action. Iron Man premiered in Sydney, Australia on April 14, 2008, and was released in the United States on May 2, 2008. The film grossed over $585 million on a $140 million budget, and received praise for its acting, particularly Downey's performance as Tony Stark, as well as the visual effects and action sequences. It was nominated for two Academy Awards for Best Sound Editing and Best Visual Effects.