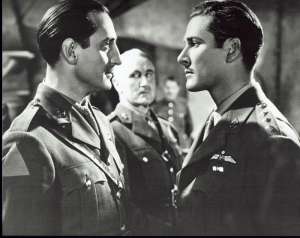 Movie Still Reprint 8"x10" The First of the Few (US title Spitfire) is a 1942 British biographical film produced and directed by Leslie Howard, who stars as R. J. Mitchell, the designer of the Supermarine Spitfire fighter aircraft. David Niven co-stars as a Royal Air Force officer and test pilot, a composite character that represents the pilots who flew Mitchell's seaplanes and tested the Spitfire. The film's title alludes to Winston Churchill's speech describing Battle of Britain aircrew, subsequently known as The Few: "Never was so much owed by so many to so few". Leslie Howard's portrayal of Mitchell has a special significance since Howard was killed when the Lisbon-to-London civilian airliner in which he was traveling was shot down by the Luftwaffe on 1 June 1943. His death occurred only days before The First of the Few was released in the United States, with the title Spitfire.