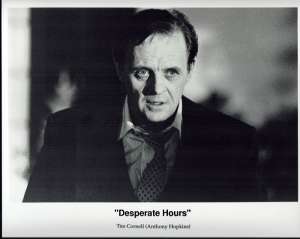 Movie Still 8"x10".Desperate Hours is a 1990 remake of the 1955 William Wyler crime drama of the same title. Both films are based on the novel by Joseph Hayes, who also co-wrote the script for this film with Lawrence Konner and Mark Rosenthal. (Rosenthal and Konner's other collaborations include the screenplay of Superman IV: The Quest For Peace.) Desperate Hours stars Mickey Rourke, Anthony Hopkins, Mimi Rogers, Kelly Lynch, Lindsay Crouse, Elias Koteas and David Morse. It is directed by Michael Cimino.