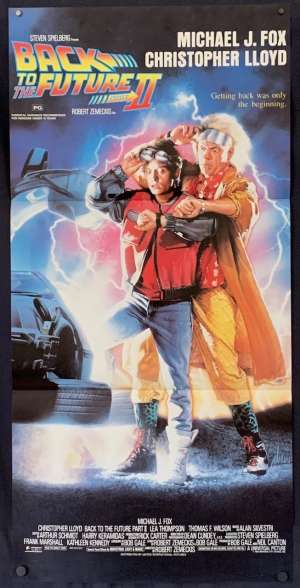 Daybill Poster Art by Drew Struzan.Back to the Future Part II is a 1989 American science fiction film directed by Robert Zemeckis and written by Bob Gale. The film stars Michael J. Fox, Christopher Lloyd, Thomas F. Wilson, and Lea Thompson. Director Robert Zemeckis said that, initially, a sequel was not planned for the first film, but its huge box office success led to the conception of a second installment.  The film was produced on a $40-million budget and was filmed back to back with its sequel, Part III. Filming began in February 1989 after two years were spent building the sets and writing the scripts. Fun Fact: Zemeckis is on record as saying the Hover Boards used in the film were real but were never released to the public due to safety concerns. Two actors from the first film, Crispin Glover and Claudia Wells, did not return. Well’s left due to personal family health reasons which led to Elisabeth Shue being recast in the role of Wells's character. Problems arose when negotiating Crispin Glover's fee for reprising the role of George McFly. When it became clear Glover was not going to return, Glover's character was not only minimized in the plot, but also obscured and recreated with another actor. Glover successfully sued Zemeckis and Gale, changing how producers can deal with the departure and replacement of actors in a role. Back to the Future Part II was released by Universal Pictures on November 22, 1989. The film grossed over $331 million worldwide, making it the third-highest-grossing film of 1989. It was nominated in 1990 for an Academy Award for Best Visual Effects.