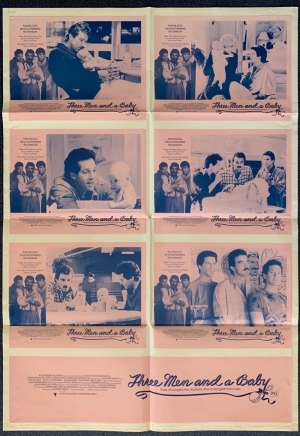 Photosheet Poster.Three Men And A Baby is a 1987 American comedy film starring Tom Selleck, Steve Guttenberg, and Ted Danson. It follows the mishaps and adventures of three bachelors as they attempt to adapt their lives to pseudo-fatherhood with the arrival of the love child of one of them. The script was based on the 1985 French film Trois hommes et un couffin (Three Men And A Cradle).The film was the biggest American box office hit of that year, surpassing Fatal Attraction and eventually grossing $167 million in the United States and Canada and $240 million worldwide. The film won the 1988 People's Choice Award for Favourite Comedy Motion Picture. he critical response to Three Men and a Baby was generally positive.