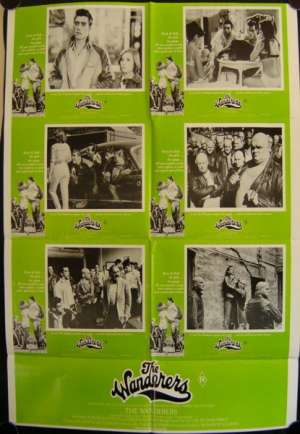 Photosheet Poster.The Wanderers is a 1979 American comedy-drama film co-written and directed by Philip Kaufman and starring Ken Wahl, John Friedrich, Karen Allen and Toni Kalem. Set in the Bronx in 1963, the film follows a gang of Italian-American teenagers known as the Wanderers and their ongoing power struggles with rival gangs such as the Baldies and the Wongs. The film is based on the novel of the same name by Richard Price; its screenplay was written by Philip Kaufman and his wife Rose. The film had a troubled development stage: after unsuccessfully trying to obtain financing for The Wanderers from Alberto Grimaldi, Kaufman directed other films. After filming the remake of Invasion of the Body Snatchers, Kaufman went to New York and successfully pitched The Wanderers to Martin Ransohoff. The film's budget is unknown, but Kaufman said it was relatively low. After an advance screening, The Wanderers premiered on July 13, 1979, to mostly positive reviews. The film was a financial success, grossing $23 million at the worldwide box. The film's increasing popularity and cult status led to The Wanderers being given a theatrical re-release in the U.S. by Warner Bros. in 1996.