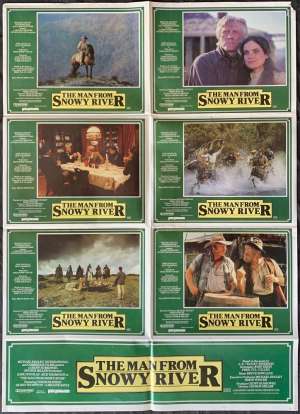 Rarely seen original Australian Country Of Origin Photosheet Poster.The Man from Snowy River is a 1982 Australian drama film based on the Banjo Paterson poem "The Man from Snowy River". Released by 20th Century Fox, the film had a cast including Kirk Douglas in a dual role as the brothers Harrison (a character who appeared frequently in Paterson's poems) and Spur, Jack Thompson as Clancy, Tom Burlinson as Jim Craig, Sigrid Thornton as Harrison's daughter Jessica, Terence Donovan as Jim's father Henry Craig, and Chris Haywood as Curly. The film "was released to a fair degree of critical acclaim" and "moviegoers found it to be a likable and highly entertaining piece of filmmaking that made no effort to hide its Australian roots. The film won a number of AFI awards and was nominated for a 1983 Golden Globe Award for Best Foreign Film Australia.