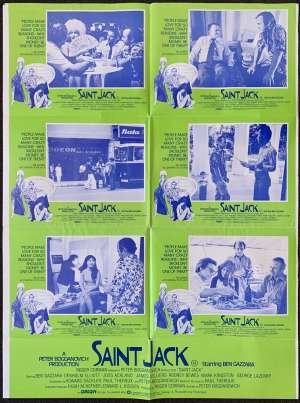 Photosheet Poster.Saint Jack is the story of an Italian American, Johnny Flowers (Ben Gazzara, in one of his most memorable roles) fulfils his dream of opening a whorehouse in Singapore during the final years of the Vietnam War. A street-savvy hustler, Johnny is inevitably caught up in the seamy and seedy Singapore underworld. Described by Roger Ebert as 'a revelation', Saint Jack is a fine character study driven by Gazzara's charisma and a subtle, suspenseful plot.