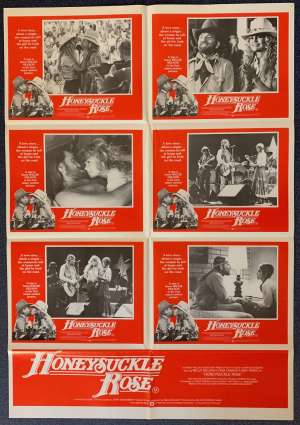 Rare Photosheet Poster.Honeysuckle Rose (also known as On the Road Again) is a 1980 American romantic drama film directed by Jerry Schatzberg, written by John Binder, Gustaf Molander, Carol Sobieski, Gösta Stevens, and William D. Wittliff, and starring Willie Nelson, Dyan Cannon, and Amy Irving. It is a loose remake of the 1936 Swedish film Intermezzo. The storyline was as such: Buck Bonham is a country singer, with a good family, struggling to find national fame. He juggles his music career with his responsibilities to his wife and son. He has everything going his way until the daughter of his former guitarist joins his tour. The road leads to temptation, which leads to his downfall. The only question is will his family and friends stand by him? In 1981, Nelson was nominated for an Academy Award for Best Original Song for "On the Road Again". Honeysuckle Rose opened theatrically in 826 venues on July 18, 1980 and earned $2,189,966 in its first weekend, ranking third in the domestic box office. Ultimately, the film grossed $17,815,212.