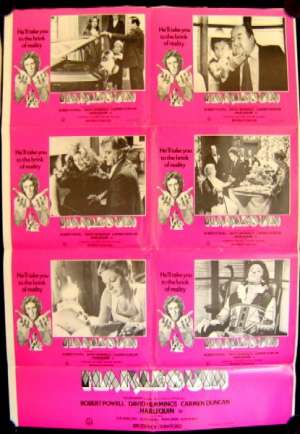 Rare Country Of Origin Photosheet Poster.Harlequin (known as Dark Forces in US) is a 1980 Australian thriller film directed by Simon Wincer and starring Robert Powell, Carmen Duncan, David Hemmings and Broderick Crawford. The script was written with David Bowie in mind for the lead role and conversations were had with Bowie but the filmmakers got "cold feet" at the last minute and cast Robert Powell. The original choice for the role of the senator was Orson Welles but he wanted $80,000 a week for two weeks so Broderick Crawford was cast instead. The film is a modern-day retelling of the historical figure Rasputin. Simon Wincer and Everett De Roche had previously collaborated on Snapshot (Sigrid Thornton’s debut film) but were not happy with the film since it was made so hurriedly. They decided to make another film, came up with six ideas and eventually chose The Minister's Musician, a modern-day version of the Rasputin story. The movie was shot in late 1979 over six weeks, using Panavision. It was filmed in Western Australia due to the source of funding. The film upon release was very successful overseas particularly in South America due in part to Robert Powell's popularity there. It was nominated for a number of AFI awards and won a number of film festival awards.