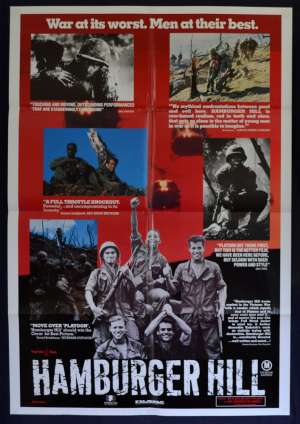 Rare Photosheet Poster.Hamburger Hill is a 1987 American war film about the actual assault of the U.S. Army's 3rd Battalion, 187th Infantry Regiment, part of the 3rd Brigade, 101st Airborne Division "Screaming Eagles", on a well-fortified position of the North Vietnamese Army on Ap Bia Mountain near the Laotian border. American military records of the battle refer to the mountain as "Hill 937", its map designation having been derived from it being 937 meters high.Written by James Carabatsos and directed by John Irvin, the film starred Dylan McDermott, Steven Weber, Courtney B. Vance, Don Cheadle and Michael Boatman. Set in May 1969 during the Vietnam War, the movie was produced by RKO Pictures and distributed by Paramount Pictures. ‘The Washington Post’ credited the filmmakers for creating a "deeply affecting, highly accomplished film".