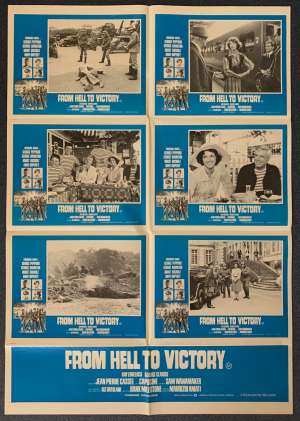 Rare Photosheet Poster.From Hell to Victory is a 1979 Euro War film directed by Umberto Lenzi and produced by Edmondo Amati. It stars George Peppard, George Hamilton, Horst Buchholz and Sam Wanamaker. The film was a co-production between Italy, Spain, and France. Other stars from these countries consequently appear. The plot follows a group of six friends of different nationalities who are forced apart on different sides during World War II. It depicts several historical wartime episodes including the Battle of Dunkirk and the Liberation of Paris. Exterior filming locations include Paris and Spain, with interiors at Cinecittà Studios. The opening sequence was shot in Casa de Campo park in Madrid. The film also uses stock footage from several other Euro War films, including Eagles Over London and The Inglorious Bastards.