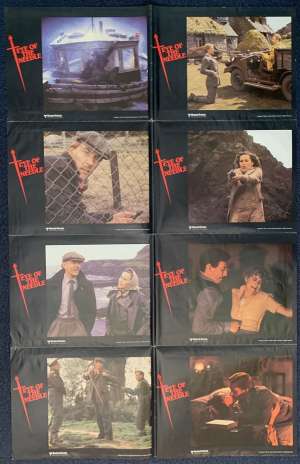 Photosheet Poster.Eye of the Needle is a 1981 British spy film directed by Richard Marquand and starring Donald Sutherland and Kate Nelligan. Written by Stanley Mann, it is based on the 1978 novel of the same title by Ken Follett. The film is about a German spy in England during World War II who discovers vital information about the upcoming D-Day invasion and his attempt to return to Germany while he is stranded with a family on the isolated (fictional) Storm Island, off the coast of Scotland. The Storm Island scenes were shot over eight weeks on the Isle of Mull, in the Inner Hebrides. The distinctive Connel Bridge appears in the film, and some of the location filming was shot at Blackbushe Airport, Yateley. The film is reviewed today very favourably.