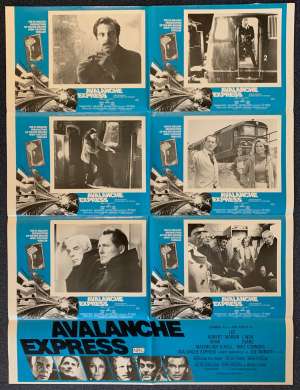 Photosheet Poster.Avalanche Express is a 1979 cold war adventure thriller film produced and directed by Mark Robson (his final film), about the struggle over a defecting Russian general. It starred Lee Marvin, Robert Shaw (in his last performance), Maximilian Schell, and Linda Evans. The screenplay by Abraham Polonsky was based on the 1977 novel of the same name by Colin Forbes. Both Shaw and Robson died near the end of shooting. The Daily Mail praised it as a "highly effective Cold War thriller", singling out the claustrophobic train scenes for excitement.