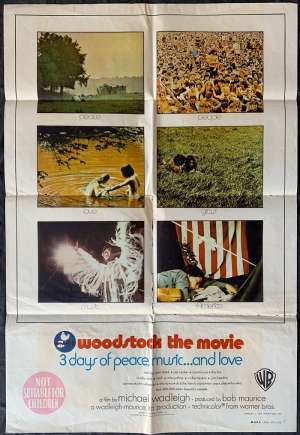 Rarely seen Woodstock Australian One Sheet size Poster.Woodstock is a 1970 documentary film of the watershed counterculture Woodstock Festival which took place in August 1969 near Bethel, New York. Entertainment Weekly called this film the benchmark of concert movies and one of the most entertaining documentaries ever made. The film was directed by Michael Wadleigh. Seven editors are credited, including Thelma Schoonmaker, Martin Scorsese, and Wadleigh. Woodstock was a great commercial and critical success. It received the Academy Award for Best Documentary Feature. Schoonmaker was nominated for the Academy Award for Best Film Editing, a rare distinction for a documentary. Dan Wallin and L. A. Johnson were nominated for the Academy Award for Best Sound. The film was screened at the 1970 Cannes Film Festival, but was not entered into the main competition. Woodstock received universal acclaim from newspaper and magazine critics in 1970 and it was also an enormous box office smash.