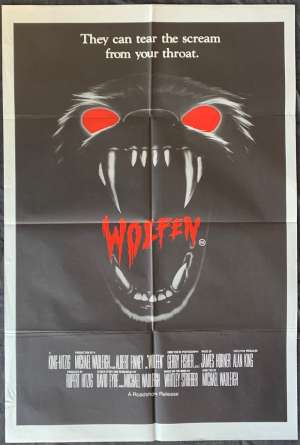 Original Australian One Sheet Poster. Wolfen is a 1981 American crime horror film directed by Michael Wadleigh and starring Albert Finney, Diane Venora, Gregory Hines and Edward James Olmos. It is an adaptation of Whitley Strieber's 1978 novel The Wolfen. The film is known for its early use of an in-camera effect to portray the subjective point of view of a wolf. Similar to thermography, the technique was later adopted by other horror films such as the Predator film. Wolfen grossed $10,626,725 at the box office and received positive reviews from film critics for its frightening content.