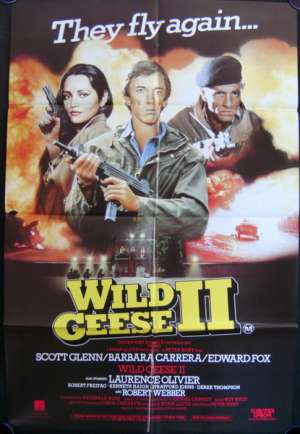 Wild Geese II is a 1985 British action-thriller film directed by Peter Hunt, based on the 1982 novel The Square Circle by Daniel Carney, in which a group of mercenaries are hired to spring Rudolf Hess (Laurence Olivier) from Spandau Prison in Berlin. Rudolf Hess’s son Wolf Rudiger Hess said after the film was released that Olivier’s likeness of his father was "uncannily accurate". The sequel has Alan Faulkner's brother (played by Edward Fox) as one of the mercenaries breaking out Hess. In April 1984 Richard Burton and Scott Glenn were announced as stars. Roger Moore was asked to reprise his role from the first film, but did not like the sequel's script. Lewis Collins (The Professionals TV series) claimed he was originally signed to play Haddad due to a contract with producer Euan Lloyd but the role went to the American Scott Glenn. This would have been as a draw card to get an American audience - something the original film failed to do due to a lack of American actors. In August 1984, a week before filming was to begin, Burton died of a heart attack at his home in Geneva and thus Edward Fox stepped in and his character was created. Other stars of the film included Patrick Stewart, Ingrid Pitt, Barbara Carrera and Robert Webber.