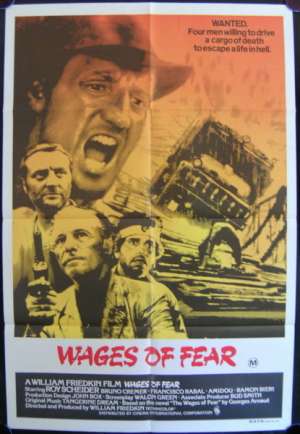 Original Australian One sheet movie poster. Wages Of Fear. One of the most nerve-wracking and exciting films ever made, Henri-Georges Clouzot's film continues to serve as a benchmark film. An unscrupulous American oil company enlists four tough drifters for a high-paying suicide mission - transporting explosives across the rough terrain of Central America. Tension and rivalry quickly develops between the foursome, magnified all the more by the unforgiving heat, the lure of the filthy lucre and the rough and rocky roads where the slightest jolt can result in agonizing death.