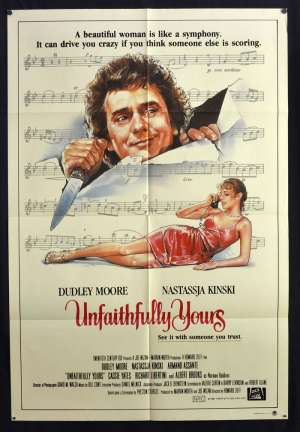 Unfaithfully Yours is a 1984 American romantic comedy film directed by Howard Zieff, starring Dudley Moore and Nastassja Kinski and featuring Armand Assante and Albert Brooks. The screenplay was written by Valerie Curtin, Barry Levinson, and Robert Klane based on Preston Sturges' screenplay for the 1948 film of the same name. The original music score is by Bill Conti and the song "Unfaithfully Yours (One Love)" was written for the film and performed by Stephen Bishop. The film was a minor commercial success. This remake from the 1948 film was originally intended for Peter Sellers but Sellers died before the film came into production. Fantastic poster artwork by Drew Struzan.