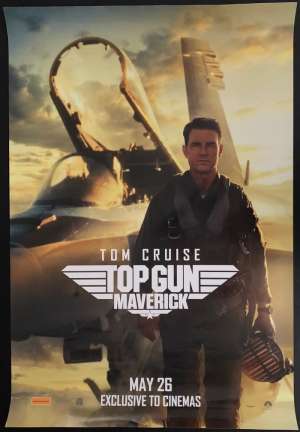 International One Sheet Rolled Poster. Top Gun: Maverick is a 2022 American action-drama film directed by Joseph Kosinski and written by Ehren Kruger, Eric Warren Singer and Christopher McQuarrie, from a story by Peter Craig and Justin Marks. The sequel to Top Gun (1986), the film stars Tom Cruise as Captain Pete "Maverick" Mitchell, reprising his role from the original, alongside Miles Teller, Jennifer Connelly, Jon Hamm, Glen Powell, Monica Barbaro, Lewis Pullman, Ed Harris, and Val Kilmer. Set 36 years after its predecessor, it follows Maverick's return to the United States Navy Strike Fighter Tactics Instructor program, where they must confront their past as he trains a group of younger aviators, among them the son of Maverick's deceased best friend – ‘Goose’. Its release was initially scheduled for July 12, 2019 but was delayed first by efforts to shoot several complex action sequences, and then by the COVID-19 pandemic affecting the film industry and scheduling conflicts. Top Gun: Maverick premiered at CinemaCon on April 28, 2022 and was theatrically released in the United States on May 27, 2022, by Paramount Pictures. The film was released to widespread critical praise, with many reviewers deeming it superior to its predecessor. The film broke several box office records upon its release, including the largest Memorial Day four-day opening weekend, and has grossed $763.1 million worldwide, making it the second-highest grossing film of 2022.