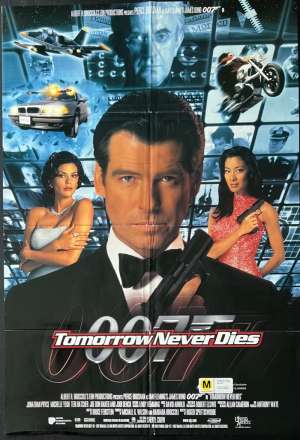 One Sheet Movie Poster double sided.This Australian one sheet was used in New Zealand for screening purposes and thus it has the NZ ratings snipe applied.Tomorrow Never Dies is a 1997 spy film and the 18th in the Bond series to be produced by Eon Productions, and the second to star Pierce Brosnan as the fictional MI6 agent James Bond. Directed by Roger Spottiswoode, with the screenplay written by Bruce Feirstein, the film follows Bond as he attempts to stop Elliot Carver, a power-mad media mogul, from engineering world events to initiate World War III. The film was produced by Michael G. Wilson and Barbara Broccoli, and was the first James Bond film made after the death of producer Albert R. Broccoli, to whom the film pays tribute in the end credits. Filming locations included France, Thailand, Germany, Mexico and the United Kingdom. The title was inspired by the Beatles' song "Tomorrow Never Knows".The eventual title came about by accident: one of the potential titles was Tomorrow Never Lies (referring to the Tomorrow newspaper in the plot) and this was faxed to MGM. But due to a typing error this became Tomorrow Never Dies, a title which MGM found so attractive that they insisted on using it. The title was the first not to have any relation to Fleming's life or work.Tomorrow Never Dies performed well at the box office, grossing over $333 million worldwide, becoming the 4th highest-grossing film of 1997 and earned a Golden Globe nomination.Its performance at the domestic box office surpassed that of its predecessor, GoldenEye.