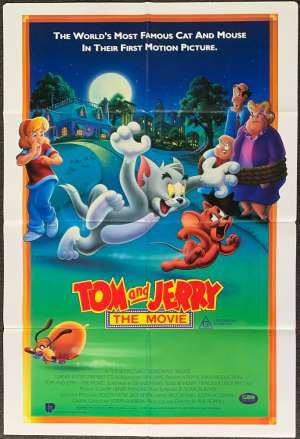 Rare Australian One Sheet size Poster.Tom and Jerry: The Movie is a 1992 American animated musical comedy film based on the characters Tom and Jerry created by William Hanna and Joseph Barbera. Produced and directed by Phil Roman from a screenplay by Dennis Marks.The film stars the voices of Richard Kind, Dana Hill (in her final film role), Anndi McAfee, Tony Jay, Rip Taylor, Henry Gibson, Michael Bell, Ed Gilbert, David L. Lander, Howard Morris and Charlotte Rae. It is the first theatrical feature-length animated film featuring the cat-and-mouse pair as well as their return to the big screen after 25 years. Joseph Barbera, co-founder of Hanna-Barbera and co-creator of Tom and Jerry, served as creative consultant for the film. The film tells the story about a little girl named Robyn Starling, who enlists Tom and Jerry's help to escape from her evil abusive aunt and reunite with her lost and presumed-dead father. After having its world premiere in Germany on October 1, 1992, Tom and Jerry: The Movie was released theatrically in the United States on July 30, 1993, by Miramax Films.