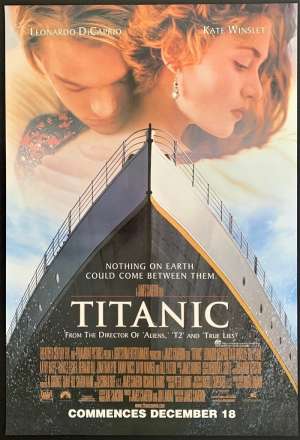 Australian One Sheet Poster with Style A advance artwork.Note that this is a rare advance one-sheet (note the "Commences December 18" at the bottom of the poster and the phrase 'This film is yet to be classified' under the True Lies credit). Titanic is a 1997 American epic romance and disaster film directed, written, produced, and co-edited by James Cameron. Incorporating both historical and fictionalized aspects, it is based on accounts of the sinking of the RMS Titanic, and stars Leonardo DiCaprio and Kate Winslet as members of different social classes who fall in love aboard the ship during its ill-fated maiden voyage. Also starring are Billy Zane, Kathy Bates, Frances Fisher, Gloria Stuart, Bernard Hill, Jonathan Hyde, Victor Garber, and Bill Paxton. Cameron's inspiration for the film came from his fascination with shipwrecks; he felt a love story interspersed with the human loss would be essential to convey the emotional impact of the disaster. It was the most expensive film ever made at the time, with a production budget of $200 million. Upon its release on December 19, 1997, Titanic achieved significant critical and commercial success, and then received numerous accolades. Nominated for 14 Academy Awards, it tied All About Eve (1950) for the most Oscar nominations, and won 11, including the awards for Best Picture and Best Director, tying Ben-Hur (1959) for the most Oscars won by a single film.