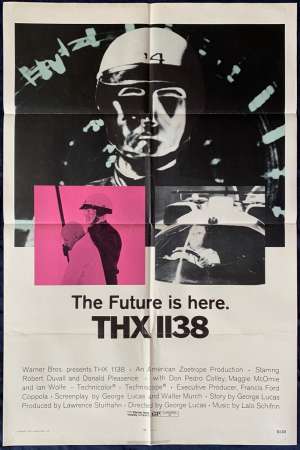 Rare One Sheet Poster.THX 1138 is a 1971 American social science fiction film directed by George Lucas in his feature film directorial debut. It is set in a dystopian future in which the populace is controlled through android police and mandatory use of drugs that suppress emotions. Produced by Francis Ford Coppola and written by Lucas and Walter Murch, it stars Robert Duvall and Donald Pleasence. THX 1138 was developed from Lucas's student film Electronic Labyrinth: THX 1138 4EB, which he made in 1967 while attending the USC School of Cinematic Arts. The feature film was produced in a joint venture between Warner Bros. and American Zoetrope. The film received mixed reviews from critics although it did receive a nomination at the 1971 Cannes Film Festival from the International Federation of Film Critics in the Directors' Fortnight section. Box office wise it underperformed on initial release however the film has subsequently received critical acclaim and gained a cult following, particularly in the aftermath of Lucas' success with Star Wars in 1977. Numerous references to "1138" or "THX 1138" appear throughout the Star Wars films as well as other films by George Lucas. For example, THX 138 is the license plate number of John Milner's hot rod in American Graffiti. Lucas also founded THX Ltd., developer of the "THX" audio/visual reproduction standards.