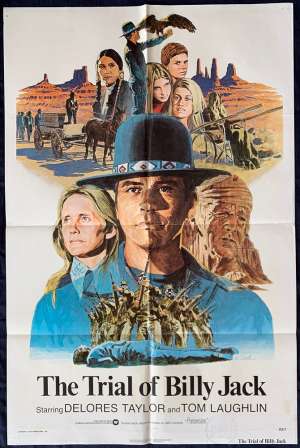 Rare USA International One Sheet Poster original. The Trial of Billy Jack is a 1974 Western action film starring Delores Taylor and Tom Laughlin who also directed the film which went for 3 hours. It is the sequel to the 1971 film Billy Jack and the third film overall in the series. Part of the film was shot in Monument Valley in Utah where John Wayne, Clint Eastwood, Tom Hanks and others have had their films shot. The film opened on November 13, 1974 in one of the widest releases of the time, 1,000 theatres by the end of its opening week. The wide release was accompanied by a $3 million advertising campaign in the opening week. In its opening five days, the film grossed $9 million and was number one at the U.S. box office, where it remained for three weeks. By 1976 the film had earned $6,716,000 in theatrical rentals in the United States and Canada. It now enjoys a cult following along with the other two films in the series.