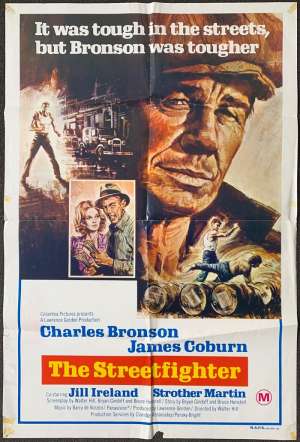 The Streetfighter Poster Original One Sheet 1975 Aka Hard Times

Australian One Sheet Poster, art by Dippel.The Streetfighter (aka Hard Times USA release) is a 1975 film marking the directorial debut of Walter Hill. It stars Charles Bronson as Chaney, a drifter freight hopping through Louisiana during the Great Depression, who competes in illegal bare-knuckled boxing matches after forming a partnership with the garrulous hustler Speed, played by James Coburn. Hill says he originally wrote the film intending to cast a younger actor, like Jan Michael Vincent, and that he wanted Warren Oates to play Coburn's role. However when he met Bronson he was extremely impressed with his fitness for a man of his age. The original cut of the movie was around two hours long. When it was cut down to around 90 minutes several fights scenes were deleted. Some movie stills however show some of the deleted fights. The film was a commercial and critical success.