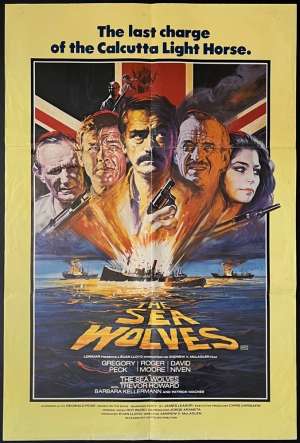 One Sheet Poster. The Sea Wolves is a 1980 war film starring Gregory Peck (Guns Of Navarone), Roger Moore (The Wild Geese) & David Niven (The Guns Of Navarone). The film is based on the book Boarding Party by James Leasor, which itself is based on a real incident which took place in World War II. The incident involved Operation Creek, the Calcutta Light Horse's covert attack on 9 March 1943 against a German merchant ship, which had been transmitting information to U-boats from Mormugão Harbour in neutral Portugal's territory of Goa. The film reunited much of the cast & crew from 1978's The Wild Geese, including Roger Moore,Kenneth Griffith,Jack Watson,writer Reginald Rose,producer Euan Lloyd,director Andrew V. McLaglen,designer Syd Cain & composer Roy Budd.