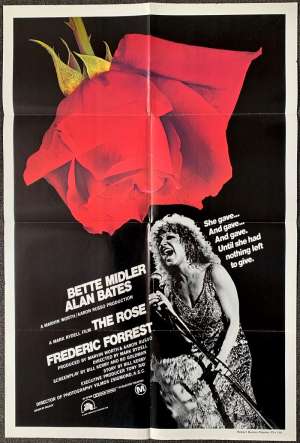 One Sheet Poster.The Rose is a 1979 American drama film which tells the story of a self-destructive 1960s rock star who struggles to cope with the constant pressures of her career and the demands of her ruthless business manager. The film stars Bette Midler, Alan Bates, Frederic Forrest, Harry Dean Stanton, Barry Primus and David Keith. The story is loosely based on the life of singer Janis Joplin. Originally titled Pearl, after Joplin's nickname, and the title of her last album, it was fictionalized after her family declined to allow the producers the rights to her story. It was written by Bill Kerby and Bo Goldman from a story by Bill Kerby, and directed by Mark Rydell.The Rose was nominated for four Academy Awards including Best Actress in a Leading Role (Bette Midler, in her screen debut), Best Actor in a Supporting Role (Frederic Forrest), Best Film Editing and Best Sound. Midler performed the soundtrack album for the film, and the title track became one of her biggest hit singles.