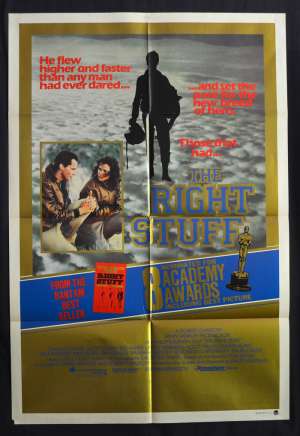 Original One sheet movie poster.The Right Stuff is a 1983 American epic historical drama film. It was adapted from Tom Wolfe's best-selling 1979 book of the same name about the Navy, Marine and Air Force test pilots who were involved in aeronautical research at Edwards Air Force Base, California, as well as the Mercury Seven, the seven military pilots who were selected to be the astronauts for Project Mercury, the first manned spaceflight by the United States. The Right Stuff was written and directed by Philip Kaufman and stars Ed Harris, Scott Glenn, Sam Shepard, Fred Ward, Dennis Quaid and Barbara Hershey. Receiving widespread critical acclaim and eight Oscar nominations at the 56th Academy Awards, four of which it won the film is culturally and historically significant.