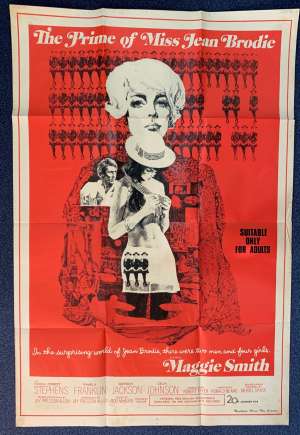 One Sheet Poster. The Prime of Miss Jean Brodie is a 1969 British drama film directed by Ronald Neame from a screenplay written by Jay Presson Allen, adapted from her own stage play, which was based in turn on the 1961 novel of the same name by Muriel Spark. The film stars Maggie Smith in the titular role as an unrestrained teacher at a girls' school in Edinburgh. Celia Johnson, Robert Stephens, Pamela Franklin, and Gordon Jackson are featured in supporting roles. The Prime of Miss Jean Brodie premiered at the 1969 Cannes Film Festival, where it competed for the Palme d'Or and was theatrically released in the UK on 24 February 1969 and in the US on 2 March 1969. The film received positive reviews with major acclaim drawn towards Smith's performance. It received two nominations at the 42nd Academy Awards: Best Original Song for it's theme song "Jean", with Smith winning Best Actress.