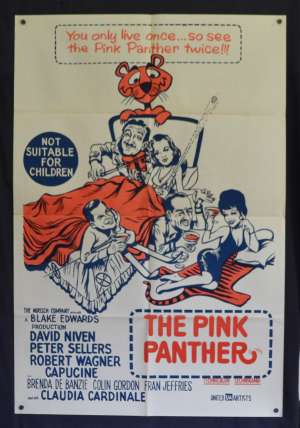 One Sheet Poster.The Pink Panther is a 1963 American comedy film directed by Blake Edwards and co-written by Edwards and Maurice Richlin, starring David Niven, Peter Sellers, Robert Wagner, Capucine and Claudia Cardinale. The film introduced the cartoon character of the same name, in an opening credits sequence animated by DePatie-Freleng Enterprises. Peter Ustinov was "originally cast as Clouseau, with Ava Gardner as his faithless wife. After Gardner backed out (the Associated Press reported in November 1962 it was because The Mirisch Company wouldn't meet all her demands), Ustinov also left the project. Blake Edwards then chose Sellers to replace Ustinov. Janet Leigh turned down the lead female role, as it meant being away from the United States for too long. The movie was a critical and commercial success. The film score written by Henry Mancini has been awarded a Grammy in the Hall of Fame Awards.