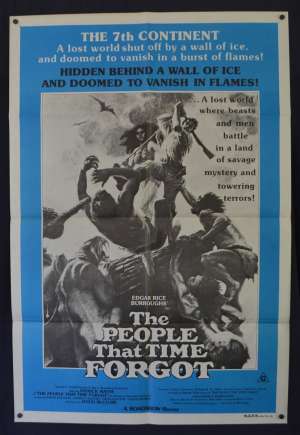 Original Australian One Sheet Poster The People That Time Forgot

One Sheet Poster.The People That Time Forgot is a 1977 Technicolor fantasy/adventure film based on the novel The People That Time Forgot (1924) and Out of Time's Abyss (1924) by Edgar Rice Burroughs. It was produced by Britain's Amicus Productions and directed by Kevin Connor. Like Connor's other two Burroughs-derived films, The Land That Time Forgot and At the Earth's Core, the film was distributed in the United States by American International Pictures. The film is a direct sequel to The Land That Time Forgot, which initiated the series in 1975. The story follows a rescue expedition, led by Patrick Wayne (John Wayne’s son) in search of his friend Bowen Tyler, played by Doug McClure, who had vanished many years before. The expedition lands on Caprona, the same fantastic prehistoric land where dinosaurs and barbarian tribes of men co-exist. Shane Rimmer (The Spy Who Loved Me) and David Prouse (Darth Vader- Star Wars) also star in supporting roles.