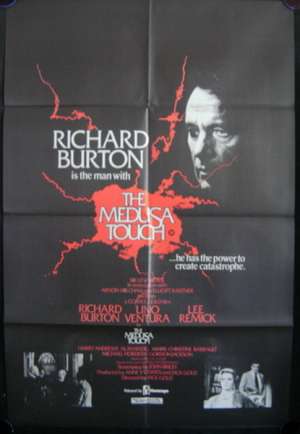 One Sheet Movie Poster.The Medusa Touch is a 1978 British supernatural thriller/horror film directed by Jack Gold. It stars Richard Burton, Lino Ventura, Lee Remick and Harry Andrews, with cameos by Alan Badel, Derek Jacobi, Gordon Jackson, Jeremy Brett and Michael Hordern. The screenplay was by John Briley, based on the novel The Medusa Touch by Peter Van Greenaway. Bristol Cathedral was used as the location for the fictional London place of worship, called Minster Cathedral in the film.The St Mary's Church Towers near Reculver were used for the scene where young John and his parents are having a picnic whilst on holiday. John wills the car to move towards his parents, which causes them and the car to fall over the cliff. Herne Bay, also Kent, was used for the scene where a young John Morlar (Adam Bridges) stays with his parents and is out on the seafront. The hotel is now residential properties.