The Man With Bogarts Face Poster Original One Sheet 1980 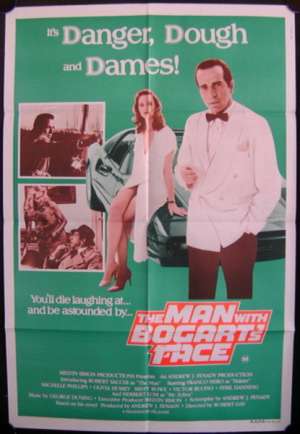 The Man With Bogart's Face Poster Original One Sheet 1980

Australian One Sheet Poster.The Man With Bogart's Face (also called Sam Marlowe, Private Eye) is a 1980 American comedy film, released by 20th Century Fox and based on a novel of the same name. Andrew J. Fenady, author of the novel, produced the film and wrote the screenplay. The film was based on the debut novel by Andrew J. Fenady who wrote it in long hand over 23 days. The film was made in May 1979 with independently raised finance from Melvin Simon Productions. Star Robert Sacchi was noted for his resemblance to Bogart, and had appeared as Bogart in various roles for over a decade, including various commercials, a Broadway production of Play It Again Sam. He had toured America for four years in a one man show Bogie's Back. The film debuted at the 1980 Cannes Film Festival and was released in Europe before debuting in the US. The New York Times called it "an intelligent, amiable and often amusing spoof of Humphrey Bogart and the roles he played".