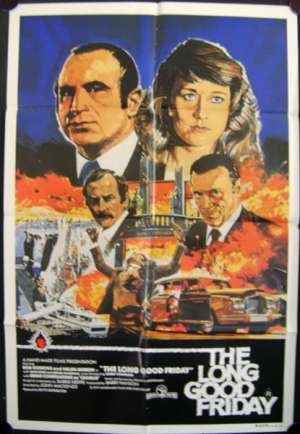 One Sheet Poster.The Long Good Friday is a British gangster film starring Bob Hoskins and Helen Mirren. It was completed in 1979 but, because of release delays, it is generally credited as a 1980 film. It was voted at number 21 in the British Film Institute's list of the top 100 British films of the 20th century, and provided Bob Hoskins with his breakthrough film role. The film was directed by John Mackenzie and produced for £930,000 by Barry Hanson from a script by Barrie Keeffe, with a soundtrack by the composer Francis Monkman; it was screened at the Cannes, Edinburgh and London Film Festivals in 1980.