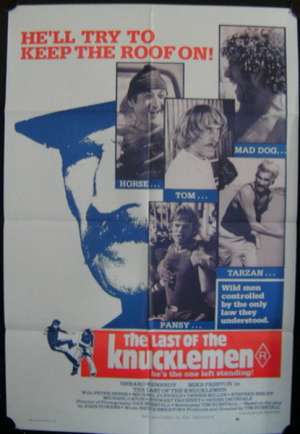 Original Australian One Sheet Poster The Last Of The Knucklemen

One Sheet Poster.The Last of the Knucklemen is a 1979 Australian film directed by Tim Burstall and based on a play by John Powers. The story involves a gang of rough miners. Tom (Peter Hehir) turns up at the mine looking for a place to hide. He allies himself with the mining foreman Tarzan (Gerard Kennedy) before the big fight. The film also stars Michael Caton and Steve Bisley. The movie was shot over six weeks in September and October 1978 mostly on sets at Melbourne's Cambridge Studios. Exterior scenes were shot in the South Australian outback town of Andamooka. Critically the film was well received and has a cult following today.