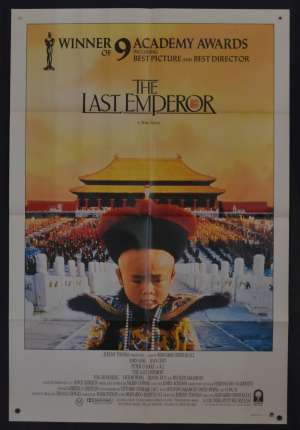 The Last Emperor is a 1987 epic biographical film about the life of Puyi, the last Emperor of China, whose autobiography was the basis for the screenplay written by Mark Peploe and Bernardo Bertolucci. Independently produced by Jeremy Thomas, it was directed by Bertolucci and released in 1987 by Columbia Pictures. Puyi's life is depicted from his ascent to the throne as a small boy to his imprisonment and political rehabilitation by the Communist Party of China. The film stars John Lone as Puyi, with Joan Chen, Peter O'Toole, Ruocheng Ying, Victor Wong, Dennis Dun, Ryuichi Sakamoto, Maggie Han, Ric Young, Vivian Wu, and Chen Kaige. It was the first occidental feature film for which the producers were authorized by the People's Republic of China to film in the Forbidden City in Beijing.It won nine Academy Awards, including Best Picture and Best Director.