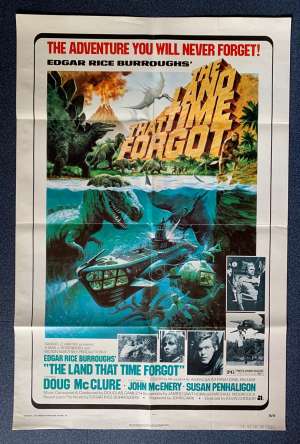 USA One Sheet Poster with artwork by George Akimoto.The Land That Time Forgot is a 1975 British-American fantasy/adventure film based upon the 1918 novel The Land That Time Forgot by Edgar Rice Burroughs. The screenplay was written by Michael Moorcock and James Cawthorn and directed by Kevin Connor. The cast included Doug McClure, John McEnery, Keith Barron, Susan Penhaligon, Anthony Ainley and Declan Mulholland. The storyline was as follows: Bowen Tyler (Doug McClure) is among a small group of survivors that overrun a German submarine after the vessel has sunk their ship. When a struggle ensues between the German officers and their captives, the U-boat, which is running out of fuel, ends up coming across an uncharted island. Unfortunately for the passengers and crew, dinosaurs and other prehistoric creatures roam the land, and everyone must fight to survive the perils of the lost island. Shooting began in February 1974 and went for 16 weeks. Kevin Connor said "Doug McClure was a great asset. In fight scenes he was especially good due to his hours of American TV action films. He knew exactly where the camera was at all times and threw punches precisely where the effect would work for the screen. He was always co-operative and came up with many ideas. The film was the 14th biggest hit at the British box office in 1975. Amicus productions was to make two more Burroughs adaptations, The People That Time Forgot (1977), a direct sequel to this film starring Patrick Wayne, Sarah Douglas and McClure and At the Earth's Core (1976), with McClure (in a different role), Peter Cushing, and Caroline Munro. All three films were distributed in the United States by American International Pictures.