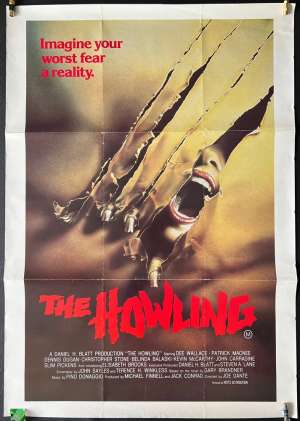 One Sheet Poster.The Howling is a 1981 American horror film directed by Joe Dante, and starring Dee Wallace, Patrick Macnee, Dennis Dugan, and Robert Picardo. Based on the novel of the same name by Gary Brandner, the film follows a television newswoman sent to a remote mountain resort after a fatal incident with a serial killer, unaware that the inhabiting residents are werewolves.The film was released on April 10, 1981 and became a moderate success, grossing $17.9 million at the box office. It received positive reviews with praise for the makeup special effects by Rob Bottin. The film won the 1980 Saturn Award for Best Horror Film while still in development.Over the years, The Howling has accumulated a cult following and a franchise consisting of seven sequels arose from the film's success.