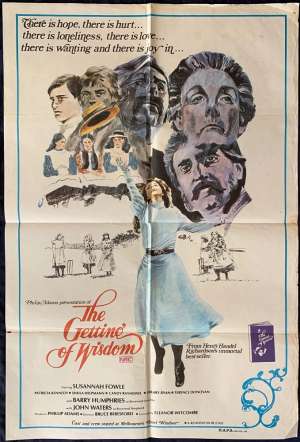 The Getting Of Wisdom Poster Original One Sheet 1978 Barry Humphries

One Sheet Poster. The Getting of Wisdom is a 1977 Australian film directed by Bruce Beresford and based on the 1910 novel of the same title by Henry Handel Richardson. The film is set in 1890s Victoria, when Laura (Susannah Fowle) enters an exclusive Melbourne ladies' college based on Presbyterian Ladies' College. The film follows her struggle for acceptance, conformity, romance, friendship and achievement over the next four years. Lesbian overtones between a schoolgirl and a music teacher are made explicit in the film, more so than in Richardson’s novel. It also starred Barry Humphries, John Waters and Terence Donovan, and featured early career appearances by Kerry Armstrong, Sigrid Thornton, Noni Hazlehurst, Maggie Kirkpatrick and Julia Blake. The film was the first production from the newly formed Victorian Film Corporation, who provided $100,000 with additional funding from the Australian Film Commission and the Nine Network. Six thousand girls were interviewed for the school pupil roles. The Getting of Wisdom was nominated for five AFI Awards in 1978 and won in the Best Adapted Screenplay (Eleanor Witcombe) category.