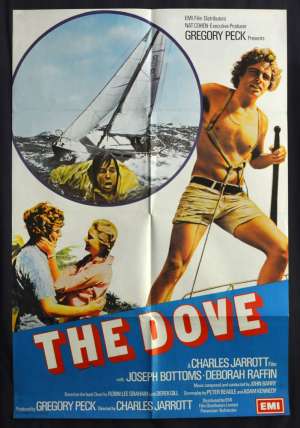 British One Sheet.The Dove is a 1974 American biographical film directed by Charles Jarrott. The picture was produced by Gregory Peck, the third and last feature film he would produce. The film stars Joseph Bottoms, Deborah Raffin and John Mellion. The soundtrack was by John Barry and the single 'Sail The Summer Winds' was a top selling hit in the UK and Nominated for a Golden Globe.The drama is based on the real life experiences of Robin Lee Graham, a young man who spent five years sailing around the world as a single-handed sailor, starting when he was 16 years old. ‘Upon a Painted Ocean’ was considered as a title before selecting The Dove. The film is a travelogue of sorts and the producers filmed on location throughout the world over a four-month period with a 32-person crew. Filming locations included: Suva, Fiji; Darwin, Northern Territory, Fremantle, Western Australia; Cape Town, South Africa; Lourenço Marques, Mozambique; Panama Canal, Panama; Ecuador; and Los Angeles. Instead of sailing a boat around the world, Peck bought nine identical boats and shipped them to nine different locations. The film performed well with European audiences. Critically, The Dove won the Golden Globe Award for the Most Promising Male Newcomer, Joseph Bottoms; 1975.