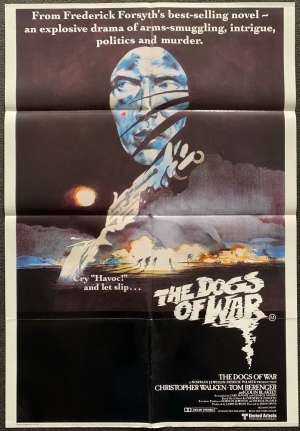 Australian One Sheet Poster Style A art. The Dogs of War is a 1980 American war film based upon the 1974 novel of the same name by Frederick Forsyth. Largely filmed in Belize and was directed by John Irvin. It was only the second international feature for the director who previously worked as a documentary maker during the Vietnam War. He went on to direct stars such as Arnold Schwarzenegger (Raw Deal) and Don Cheadle (Hamburger Hill). Starring in the film were Christopher Walken and Tom Berenger. In it a small mercenary unit of soldiers is privately hired to depose the president of a fictional African country so that a British tycoon can gain access to a platinum deposit.