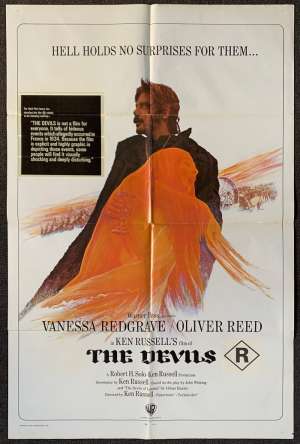 USA International One Sheet Poster art by Rene Ferracci.The Devils is a 1971 British historical drama horror film directed by Ken Russell and starring Oliver Reed and Vanessa Redgrave. Russell's screenplay is based partly on the 1952 book ‘The Devils of Loudun’ by Aldous Huxley, and partly on the 1960 play ‘The Devils’ by John Whiting, also based on Huxley's book. The film is a dramatised historical account of the rise and fall of Urbain Grandier, a 17th-century Roman Catholic priest executed for witchcraft following the supposed possessions in Loudun, France. Reed plays Grandier in the film and Vanessa Redgrave plays a hunchbacked sexually repressed nun who finds herself inadvertently responsible for the accusations. The film faced harsh reaction from national film rating systems due to its disturbingly violent, sexual, and religious content, and originally received an X rating in both the United Kingdom and the United States. It was banned in several countries, and eventually heavily edited for release in others. The film has never received a release in its original, uncut form in various countries. The film won the award for Best Director-Foreign Film in the Venice Film Festival, despite being temporarily confiscated in Verona. The United States National Board of Review awarded Ken Russell best director for The Devils and his next film, The Boy Friend. The film to this day remains hugely controversial and has a cult following.