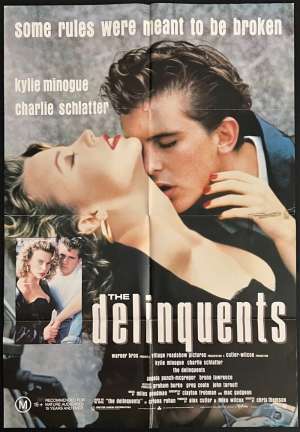 Original Country Of Origin Australian One Sheet Movie Poster. The Delinquents is a 1989 Australian drama film directed by Chris Thomson and stars Kylie Minogue and Charlie Schlatter as the main characters Lola and Brownie, and was filmed in Brisbane, Maryborough and Bundaberg, Queensland. The film was released internationally, including the United Kingdom, Finland, Sweden, Netherlands, and West Germany.The film was notable as being the debut for pop singer Minogue. The Delinquents grossed $3,370,650 at the Australian box office in Australia, which is equivalent to $5,864,931 in 2009 dollars. It was the most successful Australian film of 1990 on Australian soil. In the United Kingdom it reached number one, grossing £1,072,110 in its first week, equivalent to £2,637,390 in 2017.