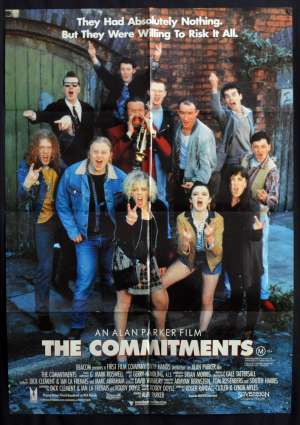 Original One Sheet movie poster.The Commitments is a 1991 Irish-British-American musical comedy-drama film based on the 1987 novel of the same name by Roddy Doyle. It was directed by Alan Parker, and written by Doyle, Dick Clement and Ian La Frenais. Set in the Dublin Northside, the film tells the story of Jimmy Rabbitte (Robert Arkins), a young music fanatic who assembles a group of working-class youths to form a soul band named "The Commitments".The film's young lead actors were mostly inexperienced, and were cast due to their musical backgrounds and resemblance to the characters in the novel. Upon release, The Commitments grossed $14.9 million during its North American theatrical run. Reviewers praised the music, performances and humour. The film received an Academy Award nomination for Best Film Editing, and won four BAFTA Awards for Best Film, Best Direction, Best Adapted Screenplay and Best Editing. The Commitments has been regarded as a cult film and one of the best Irish films ever made.