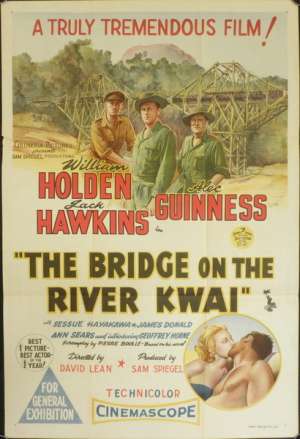 Original Australian One Sheet Poster The Bridge On The River Kwai

One Sheet Poster. The Bridge On The River Kwai is a British-American 1957 World War II epic film directed by David Lean and starring William Holden, Jack Hawkins, Alec Guinness, and Sessue Hayakawa. Based on the novel Le Pont de la Rivière Kwai (1952) by Pierre Boulle.Carl Foreman was the initial screenwriter, but Lean replaced him with Michael Wilson. Both writers had to work in secret, as they were on the Hollywood blacklist. As a result, Boulle (who did not speak English) was credited and "won" the Academy Award for Best Adapted Screenplay; many years later, Foreman and Wilson posthumously received the Academy Award.The film was widely praised, winning seven Academy Awards (including Best Picture) at the 30th Academy Awards.