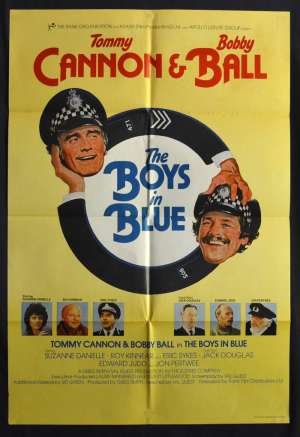 Original British One Sheet Movie Poster The Boys in Blue

The Boys in Blue is a 1982 British comedy film directed by Val Guest and starring Tommy Cannon, Bobby Ball, Suzanne Danielle and Roy Kinnear. It is loosely based on the 1938 Will Hay film “Ask a Policeman”, which Guest co-wrote. The storyline is as follows: Some policemen who have failed to make any arrests are threatened with dismissal, and begin to invent crime to justify their existence. It was the final feature film that Guest directed. The film was shot primarily at Elstree Studios in Hertfordshire, England, but many other locations throughout the United Kingdom where used, such as Edlesborough, Eaton Bray, Weymouth, Wool, Lulworth Cove, St Albans, Borehamwood and Bushey Heath.