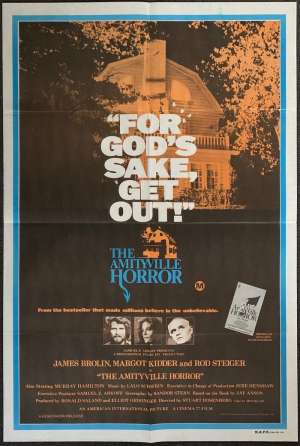 Original Australian One Sheet Poster.The Amityville Horror is a 1979 American supernatural horror film based on Jay Anson's book of the same name (1977). Directed by Stuart Rosenberg, it features James Brolin and Margot Kidder as a young couple who purchase a home haunted by combative supernatural forces. The story is based on the alleged experiences of the Lutz family who bought a new home in Amityville, New York where a mass murder had been committed the year before. Upon its release in the summer of 1979, The Amityville Horror was a major commercial success for American International Pictures, grossing over USD $80 million in the United States and going on to become one of the highest-grossing independent films of all time. The film has been contemporarily noted by film scholars as a classic of the horror genre. It was nominated for an Academy Award for Best Original Score by composer Lalo Schifrin and Kidder also earned a Saturn Award nomination for Best Actress.